In the American Revolution,October 25, 1780, General Marion learned Colonel Tynes with a party of over ninety drew supplies and new muskets at Camden. Tynes was camped at the edge of Tearcoat Swamp between the forks of the Black River. Marion called a muster and with 150 men moved to Kingstree. He then turned west and moved swiftly toward Tearcoat. After scouting the encampment Marion split his force into three companies and attacked at midnight. The attackers killed six, wounded fourteen, and captured twenty-three men. They also captured the food, baggage, ammunition, eighty new muskets, and horses with saddles. However, Tynes escaped but was captured a few days later in the High Hills. Artist is Will Anderson of Stateburg, SC, mural completed 2002.
For more information see clarendonmurals.com

The Town of Turbeville is located in Clarendon County, South Carolina at the intersection of Highways 301 and 378.

In 1840 Michael Turbeville bought 125 acres of land one mile north of the present Town limits in Diles Bay and built a home on this property. Sometime between 1870 and 1875, William J. Turbeville, son of Michael, purchased approximately 200 acres from John McFaddin and built the first house in what is now the Town of Turbeville. His brother, Clem, likewise bought land and built next to William.

Since their land was substantially covered with large pine trees, the brothers built a turpentine still which they ran for about 20 years. They also built a large store where they carried on an extensive mercantile business for an even longer time. During those years the community was known as “Puddin’ Swamp”. 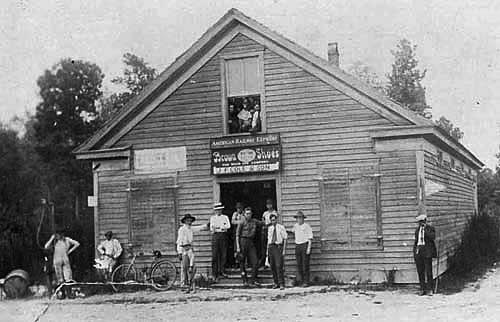 After the pine trees were completely “bled” and the turpentine business was no longer profitable, the brothers put in a saw mill to cut timber, mostly for local consumption because of the increase in building in the area. During this time the D.W. Alderman and Sons Company of Alcolu built a railroad through the area and began buying much of the timber. In addition to the freight cars on this line, passenger service was also added to this line.

This railroad station, with an express office and a barber shop in the back, was located at Coles Crossroads or commonly known as Seloc (Seloc is the name Coles spelt backwards). Coles Crossroads was named for the Cole families on whose land the station was built which was one mile east of the beginning point of Turbeville.

The Town was laid out in 1912, lots were sold and businesses began to spring up. The Turbeville’s General Store was still in operation and the other stores were being built.

With the exception of the Depression years, Turbeville has thrived in spite of two fires, on in 1938 and another in 1970. Today Turbeville’s population has increased to 720 people with 321 housing units. Over the years volunteerism has provided the town and community with fire and rescue departments.

21st Century Turbeville has been characterized as “small town with a big heart.” The Town of Turbeville is a progressive and energetic town with the goal to provide its citizens with the best services a town can provide and families with the best environment in which to raise a family. Turbeville is a town which celebrates a rich history, yet keeps an eye to the future. The Town’s leadership has set goals which will make the livability and quality of life in Turbeville the best in the state. Residents and officials work diligently to keep the town the best place in the country to work, live, and play.